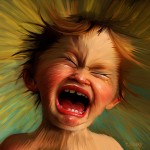 Have you taken a look around lately? If so, you’ve probably noticed the enormous amount of children on iPhones, tablets, and other gadgets. It’s not unlikely to have little ones navigating smart phones before they can even articulate words.

While here at NSquared we think it is fantastic to be tech savvy, it is not cool for kids to be buried in technology constantly and missing out on what some of us remember as a normal childhood (getting dirty outside, reading books made out of paper in a totally rockin’ blanket fort, and riding a bike, etc.).

Check out, 6 Tips for Defusing Tech Tantrums, for some tips on keeping your little techies in line.

My daughter had taught herself to swipe open an iPhone before she could walk, and since then, has found a few favorite apps she can navigate to, fiddle with and, occasionally, delete (along with emails, it turns out). She is not yet two years old, but despite our best efforts, she is drawn to the glow of a smartphone or tablet like the proverbial moth to flame. And it is when we try to wrest it from her tiny mitts that we have discovered the modern phenomenon of the tech tantrum.

Go anywhere today and kids are alternately staring with zombie-like glazed eyes at a tablet, or having meltdowns when they’re snatched away — in restaurants, at the mall, on buses and subway and, naturally, on planes.

To put this blossoming trend in context, I’ll share a few numbers. A Nielsen report last year found that in tablet-owning households, seven out of 10 parents let their kids play with their tablets. And a recent Pew study found that tablets are in 30% of U.S. households already, and that smartphones were used by 61% of mobile subscribers. Taken together, most of the 110 million households in the United States likely have at least one smartphone, and a few tens of millions of households have tablets (and some 40% of them are iPads).

Dr. Fran Walfish, a Los Angeles-based child and family psychotherapist and author of The Self-Aware Parent (Palgrave Macmillan, 2010), said that she regularly deals with issues of toddlers, tech and tantrums in her practice. “We have a lot of 2-year-olds using tablets now, and I see 3- and 4-year-olds that are already addicted,” she said. “It’s mind-blowing and a little scary.”

Though the American Academy of Pediatrics has yet to adopt an official stance when it comes to using these devices, Walfish has adopted their recommendation that toddlers under the age of two not watch any TV programs that endorse the use of tablets or smartphones. For preschoolers, she said parents should limit screen time to about 30 minutes total per day, bumping that up to 45 minutes for kindergartners. Walfish added that kids shouldn’t be left alone to play with tablets or smartphones.

There are several timer-style apps that shut down a device after set periods of use, such as Kid Time ($2.99; iOS), Kaboom (99 cents; iOS) and Kido’Z Play Mode (Free; Android). Keep in mind that older children will figure out how to bypass these apps, so you’ll need to enable passwords to unlock your devices. Devices like the Amazon Kindle Fire HD offer features such as FreeTime, which allows you to set a time limit on tablet use.

Kids should be restricted to games and apps you’ve vetted ahead of time. “For preschool kids, it should only be educational apps to help learn numbers, letters, colors and so on — ones which mimic the skills they’re learning,” Walfish said.

With iOS devices you can restrict and password protect the use of specific apps and types of content in the Settings menu, including the ability to add, buy or delete apps, or access movies or music, or access only kid-rated content among others. For Android, you can set up multiple user accounts so that your child has his own account and can only access apps you install. Tablets such as the child-focused Fuhu Nabi 2 come with powerful parental controls, including time-limit settings and app access restrictions.

With the ability to make in-app purchases, your kid can quickly run up ludicrously high charges on your credit card (in one case, about $2,500 in a few minutes) without even needing a password. Lock down access to app and media stores so that your kid can’t download anything without using a password.

For iOS, you can turn on restrictions in Settings and turn off in-app purchases altogether. Similarly for Android, you can require a password for all downloads, which includes in-app purchases.

4. Use Devices as Motivators, Not Bribes

“Electronics shouldn’t be used as bribery, but they can be effectively used as motivators,” Walfish said. “Parents can say ‘show me you can get in the car seat and buckle your seatbelt and I can let you play on the iPad today when we get home.'” That’s a world different than offering access for not acting poorly. Walfish also pointed out that also doesn’t mean dangling your iPad like a carrot for every little behavior. It should have a role roughly on a par with ice cream.”

Contact us for all of your inbound marketing and IT needs. And don’t forget to get the little ones in your life techin’ it out in moderation. Have a wonderful weekend!