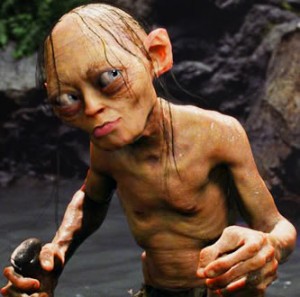 Cheesy social media poses. You’re not guilty of them right? Of course not. Neither are we here at NSquared. We are way too hip for that…Gollum isn’t though.  He has had the duck face for a really long time.

Check out 13 Cliched Photo Poses You’re Totally Guilty of Doing for the best of bathroom selfies, duck faces, and girls giving each other eskimo kissies (so endearing, right?).

Looking cute in a photo can be tough.

Sometimes, the waiter taking a picture of your birthday dinner is standing so close that you know you’re about to look like a giantess. Or maybe you’re stranded without a drink to hold onto, no pockets and no idea where to put your arms.

When faced with such obstacles, most of us think fast and pull out one of the old standbys. Sure, they’re a little cliché. But when properly employed, they can look pretty darn good.

Here’s a roundup of the photo poses you’re totally guilty of falling back on.

We’ll start with the basics. Once you get going with this optical illusion trick, it’s not an easy habit to break. You have to admit, those arms look pretty phenomenal.

Oh, is that a camera? LOOK HOW MUCH FUN WE’RE HAVING! Perfect for Facebook cover photos and framing for your living room.

Simply adorbs. Perfect for big and little sister moments, both biological and sorority.

Sure, it may look a little forced, but the love is there.

Great for slimming and elongating those stems. And if it works for Angelina Jolie, it’s good enough for us.

Adds dimension to a group shot and makes you look like one big happy Brady Bunch press photo.

Image courtesy of Taryn Antoniou, Life of a Paper Doll

Elongate your legs and make your governess proud at the same time.

If you listen closely enough, you can almost hear the “WOOOO!”

Because drinking from a straw makes the kissy face acceptable.

Perfect for optimizing your best angles and taking 25 in one sitting so you can be sure you have a winner.

Fellas, you’re not off the hook here. Take a deep breath, puff up that chest and make a face like you just shoplifted a chain necklace from Macy’s.

Contact us for your IT and inbound marketing needs. Catch ya’ll next time!